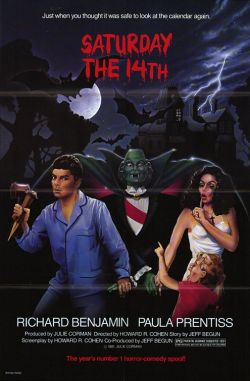 Before watching the movie:

Mel Brooks, early Zuckers, and the Scream movies. Those are the successful genre parodies I can think of right now. This one, I think mainly lasts because it’s an accessory to the Friday the 13th legacy (or a remora on it).

Reviews I’ve seen are mixed and polar. The biggest name now isn’t the lead. I’m thinking maybe this will be a decent cult movie, but almost definitely no classic.

After watching the movie:

The Hyatt family inherits their uncle’s cursed house,  which is theirs in total, but if sold, will be split among all their unpleasant relatives. Waldemar and Yolanda, a vampire couple that have been searching for hundreds of years, desperately want to buy the house or at least get inside because Waldemar believes it contains the Book of Evil, a powerful artifact that could allow the one who holds it to rule or destroy the world. Ten-year old son Ben Hyatt finds the book and begins to flip through its pages, causing the monsters depicted to materialize around the house, until he finds a warning that portends the end of the world on Saturday the 14th. Which happens to be the night that the Hyatt relatives are all invited for a housewarming party.

There are “playing with all the toys” pastiches, which have a strong feeling of affection and enthusiasm for the source material, and then there are movies like this, which are more “use everything and the kitchen sink and something will have to work”. Some sequences work, some don’t, and there isn’t much relationship between sequences.

The movie is very much of a “some things happened so we could make fun of when those things happen in other movies” tone. That’s the whole point here. A movie doesn’t have to have a major point, but it needs to have some other reason to stand out, and there’s none here. Most of the jokes are “it’s a reference! *rimshot*”. That can work when the references are unexpected, but I expect a genre parody to comment more on the things it’s referencing.

I don’t have much to talk about because there wasn’t much on screen. The cast as good? It’s too bad none of them returned for the sequel? The vampires trying to enter the house legitimately could have played off the concept that a vampire must be invited in, but then eventually they decide to just sneak in as bats, so what was the point in the first place? The end was confusing and left a lot of unresolved threads? Things happened, and sometimes they were funny.

One thought on “Saturday the 14th”

This site uses Akismet to reduce spam. Learn how your comment data is processed.

Yesterday's Movies is a film review blog where every Friday a less-than-recent movie is reviewed from the first watching. Readers are encouraged to suggest new old movies to review.